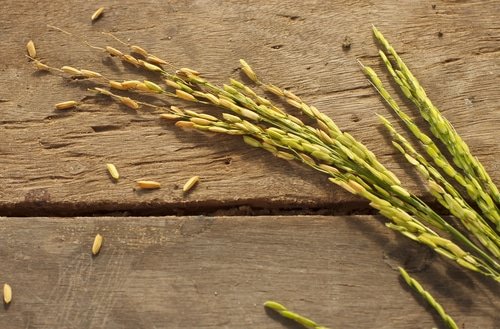 Also known as rice bran extract, rice bran oil is simply the oil extracted from the germ and inner husk of rice. It’s similar to peanut oil, with high percentages of fatty acids—which, by the way, makes it a perfect skin moisturizer!

Full of antixoidants, vitamins B and E, and wonderful natural emollients, this ingredient not only hydrates skin, but also protects.

a little bit about the ingredient itself

Rice bran oil is popular in Asian cooking because it has a high smoke point, making it suitable for deep-frying and stir-frying. It’s often used for making good tempura, and is perfect for salad dressings as it combines easily with other ingredients without separating. It’s similar to other vegetable oils, but has unique properties that make it appealing. These include its nut-like flavor and its nutritional value.

To create the oil, manufactures press the hull or bran of the rice grain, which squeezes out the oil. Some modern-day manufacturers use chemical processes, however, so look for “cold pressed” on the label.

Japan has used rice bran oil for centuries as a base for soaps and skin creams.

In an earlier animal study in 2005, researchers found that using the specific type of vitamin E found in rice bran oil called “tocotrienol rich fraction (TRF)” lowered total cholesterol levels by 42 percent, and levels of LDL “bad” cholesterol by up to 62 percent. Previous research also indicated that the same type of vitamin E from rice bran oil may have potential as an anti-cancer and anti-infection agent.

Research from Japan has indicated that another component of rice bran oil may be effective in relieving hot flashes and other symptoms of menopause. Researchers found that after taking a rice bran oil supplement for 4-6 weeks, 90 percent of participants found some relief.

Benefits to the skin

The main benefit of rice bran oil to the skin is its wonderful deep-moisturizing capability. This is due to its combination of vitamin E and fatty acids, which go deep into skin to hydrate. It’s recommended as an alternative to the popular lanolin, so keep plenty of skin cream with rice bran oil around for those cold, harsh winter months.

Concerned if you have oily skin? Try it anyway. Rice bran oil is light and penetrates easily, so it’s not likely to increase the oiliness of your skin.

With all its natural components, rice bran oil is considered an anti-aging secret in Japan. It’s actually a high compliment to tell a Japanese woman that she is a “rice bran beauty.” The natural vitamin E plus vitamin B help firm and tighten your look, maintaining hydration, which helps to reduce the appearance of fine lines and wrinkles.

The benefits don’t stop there! Rice bran oil has a slight ability to brighten the look of your skin, helping to reduce the appearance of dark spots and smooth skin tone. Antioxidants like beta-carotene and lycopene protect from environmental stressors, and enzymes like CoQ10 provide active components that help it maintain its youthful glow.